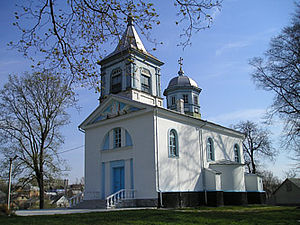 Church of the Transfiguration is occupied the former picturesque Kempa island. This is the only building that survived from the ensemble of the Transfiguration monastery, which was founded in the XVth century by princes of Ostroh. It is unique in its architectural and artistic features. It is built in the style of a tetrakhon temple. It is believed that the church of the Savior was erected in 1643 by the Uniate archimandrite Prokop Khmelevsky.  However, there is reason to believe that its construction was erected earlier – at the end of the XVIth – the beginning of the XVIIth centuries. According to tradition, prince Kostiantyn of Ostroh donated for this temple a valuable icon of the Mother of God, decorated with pearls and precious stones, which was a grace. By 1626, the monastery was Orthodox, and later the abbot Kasian Sakovych introduced the union here. In 1743 the General chapter of Dubno (the meeting of Basilian hierarchs) was held at the Transfiguration Monastery. The monastery had a magnificent library, which was transferred to the monastery of Dorohobuzh in 1812. In 1839 a bell tower was added to the church. In 2018, the temple was 375 years old.