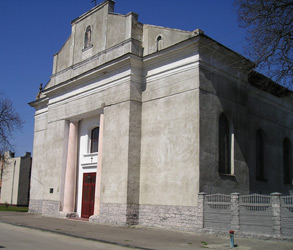 The Roman Catholic church of Jan Nepomuk is one of the spiritual shrines of our city. The history of the parish church in Dubno dates back to the ХVІth century. The first temple was wooden and located near the site of the later Bernardine monastery. It was dedicated in honor of St. Andrew. Among the officials of the Commonwealth of Poland, who contributed to the development of the temple were: prince Dmytro Korybut of Vyshnevets, prince Vladyslav-Dominik of Zaslav, Teophilia-Liudovyka of Liubomyr, prince Pavlo and Marianna Sanhushko.

The existence of a temporary wooden church named after the Ascension of the Virgin Mary is documented. It was destroyed by fire in 1811. The construction of the stone church began after 1791, and it was interrupted and continued from 1816. The consecration of the parish church was held in 1830 by local priest Aloiz Osinsky.

The church belongs to the period of the late classicism and by its stylistic features is an example of its provincial introduction. The church is named after the patron saint of the church – the venerable Czech Catholic saint, priest, martyr Jan Nepomuk. In the western church, the saint is the patron of good confession, confessors and travelers. The figure of St. Yana Nepomuk was a kind of patron saint of our city, and protected its inhabitants and guests from various disasters.

It is a historical fact that 150 years ago, in 1842, during the persecution of the Russian autocracy of the Catholic faith, a eucharistic miracle took place in the temple. When the believers came to pray, in the rays, Jesus appeared above the altar with arms outstretched over people, as if he supported them. While everyone was praying, Jesus did not disappear. The authorities prohibited the priest to tell the story, but it soon became known outside Volyn. The miracle is recorded in the Vatican documents.

In 1946 it was an attempt to close the church, but it continued to operate for about 13 years. Finally, the church was closed on November 21, 1959 and a sports school was housed. According to the decision of Dubno city council, the church was finally returned on February 9, 1994.

To celebrate the 400th anniversary of the church at the expense of the budget of Dubno city, bells were made by Polish masters of high quality alloy using ancient technology. This is the bell of John in honor of John Nepomuk and John Paul the Second. The second bell is “Seraphim” in honor of Seraphim Kashuba.