House of contracts of the XIXth century (охор. № 21-Рв) 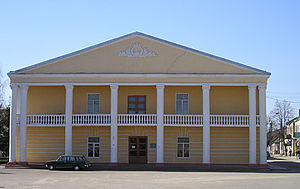 The contract house was built on Market Square at the end of the XVIIIth – the beginning of the XIXth century during the contract fairs in Dubno. The building plays the town-forming role of the central part of Dubno.
It is known that the building or a part of it was purchased at the beginning of the XXth century by a Jewish water carrier Greenberg after his return from Russian-Japanese War, where he was mobilized in 1905. According to the legend of the old man from the village of Pohoriltsi, Mykola Yakobchuk, Greenberg found a treasure in Manchuria, which he carried all the war on a drum, carefully concealing some part in those distant lands. Returning to Dubno, he married a rich girl, legalizing his treasure. Subsequently, he brought the second part of the treasure and began to get rich. He bought the water carriers, purchased several houses, including one that was on Market Square. Every year, on his birthday, Greenberg gave to water carriers several barrels of beer and a generous snack, remembering where he started. He confessed about the treasure only before his death in 1939.
The building was used not only as a living room. On the second floor, the owner had a theater hall that hosted groups from Lutsk and Rivne, choirs of Kotko and Novokhatsky, the Polish navy symphony orchestra, Shevchenko’s evenings, works of Ukrainian playwrights were displayed, and a club of working intellectuals was here.
The methods of shaping, characteristic of the epoch of eclecticism, are dominated in the stylistic solution of the architectural image of the building. In the 1920s and 1930s, the first floor of the House of contracts was occupied by shops, and on the second floor there was a cinema.
During the German occupation, films were shown at the House of contracts. Once, in the city there was an announcement that the movie will be shown on Sunday for free. The occupants’ calculation was correct: almost all the youth of the city came together. A few minutes after the film began, the armed German soldiers surrounded the hall and began to push the youth into the street, where there were already covered cars to transport people to the railway station, and from there to Germany. Eight boys of 14th years old tied their belts and went down the second floor into a narrow passage between the town hall and the House of contracts, thus avoiding bondage. One of them, the Polish by birth, Berezovsky, told this story.
There was the House of culture in Soviet times, and it has been serving children for two decades. Today it is a city home for children and young people. It is the decoration of Independence Square.