Hop factory of the end of the XIXth century 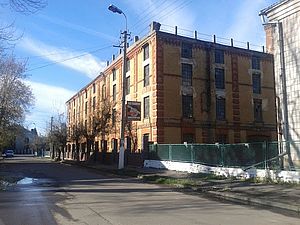 The Hop factory was built in the end of the XIXth century due to the rapid development of hop growing in the region, which was caused by the resettlement of representatives of the Czech ethnic group to Volyn.

The monument of industrial architecture consists of several buildings. The first building is located directly on Svoboda street, built in 1831; the second building is located in the yard of the Hop factory. The building was built in the 1920s. It is a two-storey, rectangular in plan. At once, the building belonged to Fishbein brothers. The vodka warehouse, which burned in 1929, was located in one of the buildings. According to the testimony of the descendants of the owners of the factory, the Hop factory was owned by Avram Hersh Perel.