The house of Elbert of the end of the XIXth century 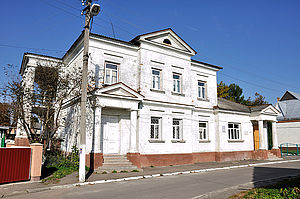 The house belonged to the Jewish family of Elberts, known in Dubno city, who at the end of the XIXth – the first third of the XXth century owned the Hop factory and horticultural enterprise. The owners of the Hop factory, Elbert brothers, were considered to be the millionaire of Dubo at the time. With the advent of Soviet power in 1939, the Elbert family was repressed and their property confiscated.

The house is located in the central part of the city. The house forms the front of the residential building of Taras Bulba street, which is formed by residential houses of the manor-type of the turn of the XIXth – XXth centuries.

This is a two-storey residential building. The main compositional axis of the facade from Taras Bulba street is fixed by a risalite, completed by a triangular pediment. Entrances from Taras Bulba street are accentuated by single-level porticoes on columns. The western facade is decorated with a four-column portico of a stylized Tuscan order. The interior has gypsum stucco moldings – rosettes with floral ornaments on the ground floor and tile stoves on the second floor.