The Synagogue of the ХVІth–ХVІІІth centuries 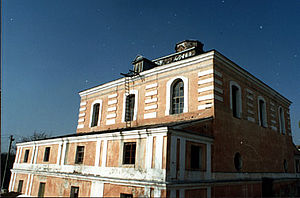 The Great Synagogue in Dubno is one of the most interesting Jewish monuments in Volyn and in Ukraine. The building is an example of a synagogue construction of the ХVІІIth century with the use of stylistic elements of the Renaissance and early classicism.

The building of The Synagogue, which has been preserved to this day, was built in 1782–1794 in the Baroque style on the site of the earlier synagogue of the ХVІth century. The Synagogue in Dubno is located in a majestic stone structure of 21 meter high. The dome is supported by 12th columns, built in 4 lines. The Synagogue is rectangular in plan, with annexes to the western and northern facades. It is located on a former commercial street where fish was sold (so, it had the same name – Fishy).

The construction of The Synagogue was carried out with the assistance of the owner of Dubno city and the patron prince Mykhailo of Liubomyr.

The choir, which performed the best compositions of the Jewish liturgy, has operated since The Synagogue was founded.

During the First World War, The Synagogue was partially destroyed in the course of hostilities and reconstructed in the 1930s.

After the Second World War, the premises were used as a warehouse. Next to the construction of The Synagogue, the Germans had a Jewish ghetto.

In Soviet times, The Synagogue was adapted to the Voluntary Society for Assistance to the Army, Aviation and Navy. In the 1980s, the synagogue was used as a production base for restoration workshops.